The first thing you may notice on this week’s chart is Axiom Envy claimed the #2 and #6 spots. The Gateway Wizard was a newcomer to the Top 20 at #16. The Force ESP climbed the highest in the Top 20 from #19 to #6. Paul McBeth’s Prototype Putter held the #1 spot for the second week in a row, and his Signature ESP Buzzz disc stayed in the top 5. Innova’s Star Destroyer remained in the top 3, continuing its hold as one of the more popular discs on the market.

Innova dominated the Top 20 again with 10 discs in our Top 20. Discmania and Discraft followed next with three discs each. Gateway and Dynamic entered our Top 20 with one disc apiece. 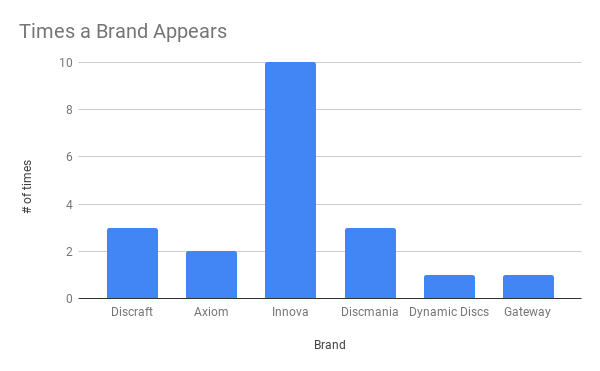 WINNER – Nobody guessed the Classic Blend Burst JUDGE as the #12 disc this week. Don’t be discouraged, keep your guesses coming for this weeks gift card prediction.

GIFT CARD PREDICTION FOR NEXT WEEK:  Leave your comment below this blog to predict the #8 spot for next week’s chart.