The State of Disc Golf – Social vs. Solitary Play (Part 1) 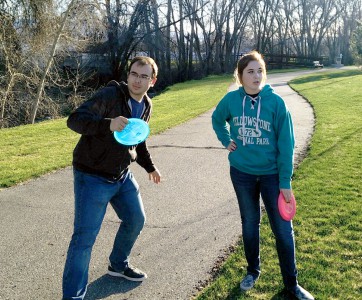 In the 2016 “State of Disc Golf” survey, some interesting statistics demonstrate how our social lives interact with our game of disc golf.  Participants answered the simple question, “Who do you play disc golf with?”

For those who are playing the game with other people, there is some interesting data that shows with whom you are most likely playing. Considering the lopsided balance between male and female players surveyed (95.7% male vs. 4.3% female) it should be no surprise to discover that 88% either “never” play with a spouse or significant other, or only “occasionally” play with a spouse or significant other. The remaining 12% ranges from “regularly” to “almost always”. Obviously, if you’re one of those players who finds himself (yes…most likely male) playing often with your significant other, then you are among the rare and the blessed. It would appear that finding a romantic relationship that can extend onto the disc golf course is an uphill battle.  Or perhaps, as a friend of mine once claimed during a disc golf outing, “I play disc golf to get away from my wife and kids—I would never want her here with me! This is my time!” I suppose if that makes you feel better…

Those statistics would seem to suggest that the socially inclined players are very likely to meet new friends on the course with whom they will at least occasionally play. However, you should probably not expect that those new relationships will develop into a “significant other” or “spouse” status. Whether that is a good thing or an unfortunate thing is up to your interpretation, but it may shed some light on why this little video clip was so popular within the disc golf community, as it apparently borders upon pure fantasy:

In the near future, we’ll take a look at how the social and solitary players measure up in terms of other statistics, like disc ownership, personal evaluation of disc golf skills, competitive nature, etc.