The Impact of One Great Throw…Caught On Camera

Sometimes it is hard to measure the influence that a single piece of social media has on an entire industry or market, but at other times, the effects can be seen almost immediately. The 2016 Beaver State Fling disc golf tournament presented one of those rare moments where a camera was in the right place at the right time, and magic ensued. Professional disc golfer, Philo Brathwaite, approached the tee for an 850 foot, par 5 hole, and managed to rattle the chains on his second throw. Shooting 3 under par on a single hole is extremely rare and is called at Albatross. It is much more rare than an ace (hole-in-one). The video of his throw was posted on social media and immediately went viral. It even made it onto popular television sports highlight reels.

So, what is the big deal? Sure, it was an amazing shot. But amazing shots happen quite often in the disc golf world, where thousands upon thousands of players throw discs at baskets with exciting outcomes. But rarely does the mainstream public get a glimpse of a relatively young sport like disc golf. It’s new to them, so somehow it seems all the more amazing, or even impossible. Retweets and Facebook posts boasted headlines like “Disc Golf Throw Defies Physics!” While those of us who play disc golf are amazed and excited by incredible throws, we know that they don’t defy physics. In fact, it is the physics that makes the discs fly the way they do when thrown the way great players throw them. Professional skill and the laws of physics put Philo’s throw exactly in the right spot.

The 2016 Vibram Open had more camera coverage than many disc golf tournaments in the past, so once again, some awesome shots were caught on camera.  A pair of aces thrown over the pond were put together in a vine that was passed around Twitter, again spotlighting the excitement of the sport. Hopefully this will happen more and more as camera coverage improves and the mainstream itches for more highlights.

Take a look at a story from a single observer named Chad, who caught a glimpse of the Philo Albatross on social media. In his own words, as shared in a conversation with customer service at Infinite Discs:

“I came across a link of some guy named Philo throwing an ace at a Beaver State Fling and started watching more videos.  I had no idea how big disc golf is.

Spent the rest of the day at work on the Google thing researching disc golf and found out that my little town of Zimmerman, MN built a small 9 hole back in 2010.  I had no idea.
So, I ordered a few starter sets (Innova, Dynamic and Latitude) and a bag, ponied up for the expedited shipping.  As soon as I got them, I went out and had a blast.  Didn’t keep score or anything. Just chucked discs at baskets for about two hours.
I think this is going to be a thing.  I’m old, kids are out of the house and I have my weekends free.  I’ve been looking for something to do outside since I don’t want to run or mountain bike any more.  I had fun when I was out there and there are a lot of courses in the twin cities metro area I’m looking forward to hitting.”

Chad indeed had ordered a box of starter sets, and inside that box was a small flyer talking about the Infinite Discs VIP Club where players can subscribe for a mystery, spotlight disc every month with a unique, collectible stamp. It’s $19.99 for a disc that you may or may not like, but when you’re a big enough fan of the sport, it’s a wonderful adventure and pleasant surprise every month. Well, Chad may be shooting +30 on 18 holes after only a month of play, but he was so excited that he subscribed, just to get a new mystery disc every month.

Another customer service email resonated in the same way, with a young woman from California subscribing just because she felt she had to feed her new “plastic addiction”. She’d only been playing disc golf for a month. What could possess new players to buy collectible discs every month? It’s a passion that is sparked merely by exposure. And exposure is something that has been missing until social media started spotlighting “physics-defying” throws. It has been a long time coming, but that exposure should increase in the coming months and years as the sport grows.

Professional player, Simon Lizotte, has been making trick shot videos for quite some time now, and he is also making a splash in tournaments across the globe. He has inspired a younger, fun-loving crop of new players who see that “golf” doesn’t necessarily have to refer to the boring sport dad and grandpa watched and played in hushed silence. Once you add the discs and an “anybody can play” attitude to the mix, the sport seems fresh and exciting. Avery Jenkins is a professional player who has left much of the competitive play to become a sort of ambassador for disc golf. He travels the world to host workshops and participate in events that spotlight the sport. The impact that he has in his face-to-face encounters and his presence at events is huge, but the fuel he pours onto the fire through his social media photos and blurbs is even more impressive.

Not everybody can afford to travel the globe promoting disc golf, but when a champion like Avery makes it his career and his mission, and splashes those efforts in a beautiful way all over Instagram, Tumblr, Facebook, Twitter, etc. then the world takes notice. It only takes a few minutes of browsing his social media content to realize that disc golf is not only a fun game, but is a sport that is surrounded by incredible beauty, vibrant variety, and life. 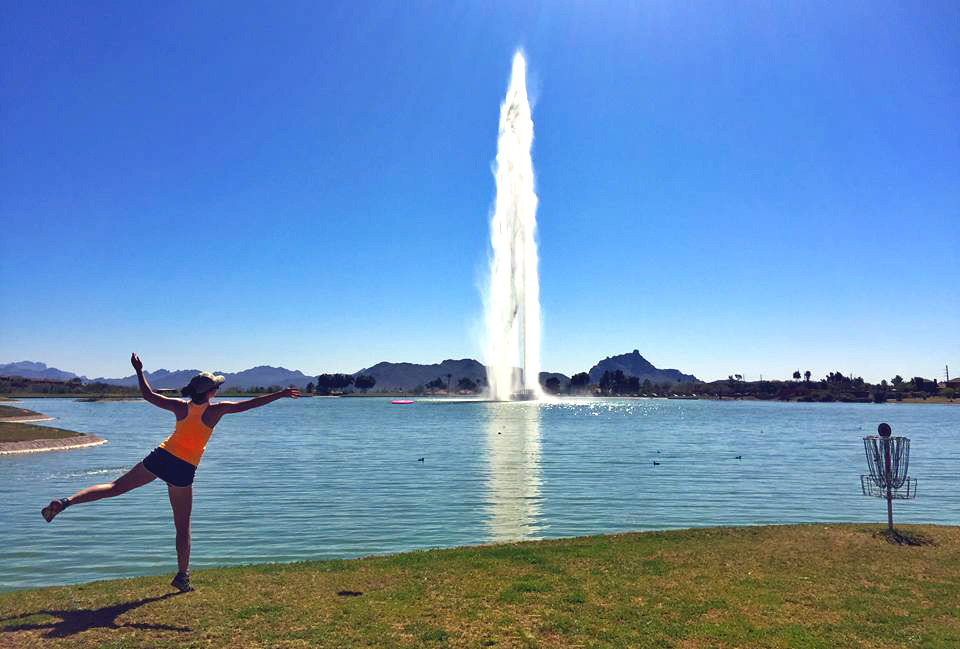 Most disc golf players could tell you that there is a very poor male-to-female player ratio. There are simply more men throwing discs at chains than there are women, but thanks to social media, there is hope! More and more women are seeing that it can be a fun, graceful, and feminine sport. Check out the wonderful photo blog by Discgolfngirl on Tumblr for a gallery of wonderful photography highlighting the women players that are bringing life to the game.

Social media is beginning to explode with disc golf, and it’s bringing new players who are not only interested, but enthusiastic about the sport. We welcome those new players and hope it becomes a lifetime of fun in the great outdoors. While you’re out playing, pull out your camera’s! Take those videos! Shoot those artsy photos of amazing disc golf courses! Take pictures of your friends as they fling those discs, and share them online. The magic happens on the course, but that magic needs to be shared and seen throughout the world.